You Are Here: Home » About Morocco 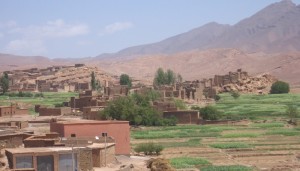 At the northwest corner of Africa. The country covers an area of ​​710, 850 km2 and has a coastline of 3,400 km with 2 sea fronts: (2,000 km from the Atlantic and 1,500 km on the Mediterranean). It has a population of 28,238,000 inhabitants, of whom 54.5% live in urban centers.
IS A CONSTITUTIONAL MONARCHY A modern country, rich in its history and vestiges. It has been inhabited since prehistoric times. Various civilizations have happened: Phoenicians, Greeks and Romans until the arrival of the Arabs starting in the IIX century with the arrival of Moulay Idriss I, founder of the dynasty of the Almoravids Idrissides pair followed, Almohades, Merinids, Saadienos and the Alaouis (Current Dynasty).
Arabic is the official language, and another is Berber, everyday language is spoken Arabic and Berber dialects. Although most Moroccans speak French, many also speak Castilian (Spanish).
RELIGION : Islam is the official religion in Morocco but perfectly coexists with other faiths.

: Although access to mosques and holy places is forbidden to non Muslims, are allowed to visit the Great Mosque Hassan II in Casablanca. The tea to mint is the symbol of hospitality and is offered frequently. In souks is used haggling prices. To take pictures of people are recommended to ask permission.
CLIMATE : Morocco offers the possibility of climate change in a few hours: from the snow-capped Atlas Mountains to the desert or the beach. The average annual sunshine is longer than eight hours a day at Agadir, Fez, Marrakesh and Ouarzazate with average temperatures of 21°. Average annual temperatures AGADIR: 23°, Al Hoceima: 19°, CASABLANCA: 21°, ESSAOUIRA: 21°, FES: 19°, Marrakech: 22°, MEKNES: 20°, OUARZAZATE: 18°, OUJDA: 19°, RABAT: 22°, TAMGER: 19°.
CLOTHING Light clothing should be worn for day and a jacket for the evenings, especially in the interior, in the south and if you travel between September and March. 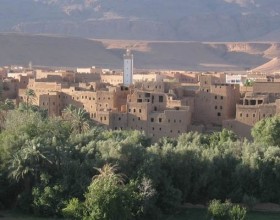 : The Spanish do not need a visa to visit Morocco for a three-month tourist stay. Passport is required for a minimum of three months or identity card for people who have bonds hotels in a travel agency.
For citizens of other countries, please visit the site of the Moroccan Ministry of Foreign Affairs and Cooperation:  http://www.maec.gov.ma/en/visiinterEN.htm
HEALTH : Vaccinations do not require no vaccine or treatment against malaria for travelers from Europe. Some precautions: Avoid water from wadis, bottled water are recommended: (those of Hayat, Imouzzer, Sidi Ali, Sidi Harazem are without gas and in Oulmès with gas). Medical assistance to aliens not free. Insurance advised.
MOROCCAN CURRENCY : The Dirham (DH) is the Moroccan currency (1 Euro = ~ 10 Dirhams). There are notes of 10, 50, l00 and 200 Dirhams, coins of 1, 5, 10 and 20 Dirhams and coins of 5, 10, 20 and 50 cents. The import and export of Dirham are prohibited. Exchanged at banks or licensed premises and keep the supporting document to convert the remaining Dirhams to 50% of the total changed.
MEANS OF PAYMENT : The import of foreign currency is free. Amounts equal to 50,000 dhs or more must be declared on arrival. Credit cards are widely accepted in large hotels, boutiques and restaurants, and sometimes even in the souks. You can withdraw money from banks with a credit card or by check or directly on the supplier of some big cities.
ACCOMMODATION : Hotels, Vacation Club and Residences Tourist There are over 600 classified (1 to 5 stars) with more than 100,000 beds. In addition, some 1,000 hostels unskilled over 25,000 beds. Riyadhs Villas Guest Houses true palaces with service personnel. Camping Caravaning situated close to beaches and forests. Youth Hostels reserved for young people. Shelters and Cottages Located in the most beautiful places of the mountain. They are located in major shopping excursions.
ELECTRICITY : 220 V in new buildings (sometimes 110 V in older buildings). Plugs are European type.
TAXIS : Very cheap, the “little taxis” (maximum 3 people) are recognizable by their bright color. Always the same in each city: red in Casablanca, Rabat blue … just moving within the city and, for example, does not lead to airports as far from the center in Casablanca. You can also load other passengers, bearing the same path. Discuss the price before departure if the vehicle has no counter. Collectives or individuals, the “big taxis” (maximum 6 people) assure communications with local and around the big cities and intercity travels. It is advisable to fix the price beforehand.
DRIVING : Documents driving license, the gray card and international insurance (green card). If the car is not yours is needed also a certified procurement.Mandatory seat belt, road signs in Arabic and French and meets international standards. Recommendations: Be cautious of other vehicles, pedestrians, cyclists, carts and animals … Drive carefully and, in winter, be careful with the snow and ice. Before entering a rural trail should be informed of their current status and check the spare wheel and the tires are used. Provide a reserve of fuel and water. 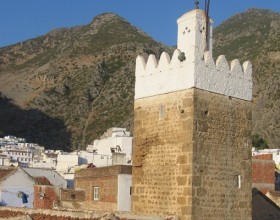 SCHEDULES : (Moroccan time is Greenwich Mean Time “GMT”)
GOVERNMENT Monday to Thursday: Morning: 08h30-12h00, Afternoon: 14h30-18h30 Friday: Morning: 08h30-11h30, Afternoon: 15h00-18h30 Monday to Friday Morning POST: 08h30- 11h450, Afternoon: 14h30-18h30 Winter
SHOPS: 09h00-20h00 Summer: 09h00-22h00 The shops are closed on Sundays except for the shops in the medina (old city) which are closed on Friday afternoon)
BANKS Monday Friday Morning: 08h15-11h30, Afternoon: 14h15-16h00 08h00-14h00 in summer.
RAMADAN SCHEDULE : During the holy month of Ramadan, the schedule is interrupted.
GOVERNMENT : 09h00 to 15h00.
BANKS : 08h00-14h00.
SHOPS: 09h00 till dawn and 19h00-23h00.
HOLIDAYS : As in Europe, we use the Gregorian calendar (Sunday holiday) for civilian use. Religious holidays, however, are governed by the Muslim lunar calendar, so dates vary each year.
NATIONAL HOLIDAYS : 01/01 New Year 11/01 Manifesto of Independence 01/05 Labor Day 23/05 National Day 30/07 Feast of the Throne 14/08 Feast of Oued Eddahab 20/08 Revolution of the King and the People 21/08 Youth Festival 06/11 Anniversary of the Green March 18/11 Independence Day.
RELIGIOUS HOLIDAYS : They are governed by the Muslim calendar and therefore dates vary each year, the Gregorian calendar. Aid el Adha (feast of the Lamb) Fatih Moharam, the first of the Hijra (Muslim year) Aid Al Fitr (the end of the month of Rabadán) The Mouloud (Anniversary of the Birth of the Prophet Mohammed).
CUSTOMS REGULATIONS : can be imported free of duty without prior notification or formalities: Personal Clothing Snuff: 200 cigarettes or 100 cigarettes or 25 cigars or 250 grams of snuff per person Alcohol: a bottle of wine (1 liter) bottle of alcohol (1 liter ) Perfumes and scented water, a perfume bottle (150ml), a bottle of scented water (250ml) Souvenirs and Gifts: for a limited value to 2000 dhs. Objects to personal or professional use: as a camera, CD player, camescope. So you have to re-order these items to your stay. Medications: For use in small quantities. You can import temporarily after a statement: Objects for personal and professional: Tape, radio, TV portable typewriter, Micro Laptop to be re-exported at the end of your stay. Goods subject to special formalities: Pets: To bring a pet requires a clean bill of health extended to a date less than 10 days and a certificate of rabies vaccination within 6 months. Plant products: Plant Health Certificate Fauna and Flora: Wild Species extinction and entertained by the products of these species (Washington Convention). CITES certificate issued by the Directorate of Water and Forests. Hunting weapons and ammunition: authorization of the National Security Services Drugs are not for personal use: Permission of the Department of Health. Goods Prohibited to import: weapons and ammunition. The stunned. The written, printed, recorded videotapes and all objects that can harm public order. The Moroccan currency (Dirham).
You can export without formalities:
_ The products of Moroccan origin: Crafts and other locally purchased unlimited value with presentation of proof of payment: Safeguards for change, check or credit card travel.
_ Souvenirs, rocks for decoration: fossil or semi precious stones (ten).
Can be exported with formalities:
_Works of Art, antiques (Permission of the department of cultural affairs). MORE INFORMATION General Customs Directorate of Customs and Impôts ADMINISTRATION Av Indirect Annakhil, Hay Ryad, Rabat Tel: 37579000 Nunero Free: 08000 7000 E-Mail: adii@douane.gov.ma (www.douane.gov.ma)